What I don’t understand is the negative reaction towards the show, ‘it was rubbish, you shouldn’t be making jokes like that, it was awkward’. The truth is it was the individuals who were watching it who were feeling awkward, not the atmosphere on set. The biggest laughs were coming from the visiting Paralympians in the studio (or the ones breaking their curfew by staying up late to watch and tweet the show) 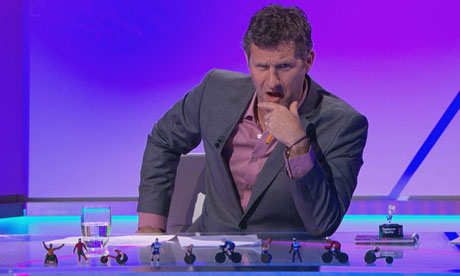 If we carry on as we are no one will ever dare to break the silence on this and as a society we’ll never improve by constantly “playing it safe”. I personally find it more offensive that I can make fun of myself and seemingly anyone else that I choose (if done tastefully and respectfully of course) yet on a night out at a comedy club the comedian always will make fun of everyone in that room except for me.

I can understand why many find Frankie Boyle offensive (he’s Scottish for a start). Channel 4s reaction to his tweet about the Saudi Arabian teams all being former thieves by axing him (oh the irony) was like doing micro surgery on someone by simply removing everything possible with a sledgehammer. Yes, comments like his are too extreme on occasion, personally I think he’s hilarious, but on this one he was also making a cultural point about barbaric justice. But he’s not the only divisive “marmite figure” on TV. Think Clarkson, Kyle, Andre, Morgan, Cowell to name but a few.

Personally I think that at least half of that list should be shot for crimes against humanity. That’s just my view, in much the same way that some can’t fathom my penchant for programmes bearing the fingerprints of Messers Clarkson or Cowell. Socially it’s our responsibility as individuals to respect difference and another person’s choice. If you don’t like something, in today’s world you don’t have to watch it if you don’t want to.

I’m personally sick of the PC brigade at the Beeb who uphold complaints about Jeremy Clarkson’s ramblings when only a handful seem to agree with them, instantly forgetting the vast majority of people who found whatever it was hilarious. In the same way, if a disabled person doesn’t want to be mocked, they don’t have to search for opportunities where they would be exposed to it (if it happens the other way around then fair enough that’s wrong as it would be with anyone else being made fun of). But I’m tired of society seemingly taking offence on my behalf. If I didn’t want that comedian at the comedy club to take the piss out of me I wouldn’t go.

The real trick to all of this is how to start breaking down these inbuilt social barriers. If the Paralympics are meant to inspire a generation and make us all think differently and more equally/openly as a culture about disability, then it’s the task of mainstream media, comedians and each of us as individuals to juggle that balancing act, walk the fine line, find a way to start that process off in a manner that is palatable to the majority. Only then will it move us slowly to a society where everyone truly is treated equally as the individuals that we all are.

It would be fair to say that the session proved to be one of the most popular among all the students within the module. END_OF_DOCUMENT_TOKEN_TO_BE_REPLACED

The webinar experience was very well received by the students. I think it is an excellent resource... END_OF_DOCUMENT_TOKEN_TO_BE_REPLACED

The students thought he was brilliant with words such as 'amazing' and 'inspiring' coming up a lot! END_OF_DOCUMENT_TOKEN_TO_BE_REPLACED

Rob understood our needs for an accessible website, guiding us through the different stages needed with relevant questions and suggestions which helped us achieve our desired website within a very tight budget. END_OF_DOCUMENT_TOKEN_TO_BE_REPLACED